Not really, but ain’t that a cool opening line? Seriously folks, the moment you glance and/or play Sega’s last arcade game featuring the now outdated Model 2 board you’ll realize the folks at the lab must be big fans of Capcom and their horror game “Resident Evil”. Everything about this shooter-on-rails, from the mutated monkeys and leeches that jump from windows and ponds to the army of dead zombies, screams “Resident Evil”. Nothing wrong with using a best-selling PSX game (over a million copies sold and counting) for inspiration, particularly if its from the most consistent third-party supporter for your floundering Saturn system (which incidentally just released “Resident Evil” for the Saturn in the States). But, with the light-gun genre being notable for lacking constant innovations in gameplay, “The House of the Dead” comes across as a slick-looking spit-shine on the tried and true engine used by the “Virtua Cop” series. My review will be slightly critical of the game, but if the line to play the game at my local arcade is any indication Sega has a (pardon the pun) monster hit on its hand.

That’s a good thing because “Virtua Cop 2”, although graphically and technologically superior, didn’t achieve the #1 arcade game status of such lame wannabe shooters like “Revolution X”, “Area 51” and “Maximum Force”. “The House of the Dead” has its H.P.Lovecraft-inspired settings as the hook (did I mention “Resident Evil”?) to keep arcade goers away from monstrosities like Konami’s recently-released “Total Vice” (someone ported the code from the awful 3DO fighter “SHADOW: War of Succession” and made it into a shooter!). It’s a shame the game will only have a limited window of opportunity to make an impact, since Sega’s upcoming Model 3 shooter based on “Jurassic Park” will raise the stakes again. But, as with “Last Bronx”, the Saturn port will give gamers a chance to keep the shooting experience alive at home for quite some time.

Aside from the unconvincing transparencies used for shattered windows and water effects (at which the Model 2 board never exceeded in the first place), this is a rock-solid, neat-looking Sega arcade game that lives up to the visual standards set by the company. True, the game is set in a firm path similar to that of the “Virtua Cop” games, but there are some set places where your character (Thomas Raugun, or your partner in two-player form, G) can take a detour and see a different part of the game. It could be a laboratory with some twisted genetic experiment running foul, or a library with zombies hiding behind the bookcases. All the zombies, mutant monkeys, flying monsters and assorted baddies are represented in sharp and life-like polygons that don’t hold anything back when it comes to the gore factor.

Body parts fly, heads get blown away, torsos are penetrated and blood flies all over the Victorian house where the game is set. The enemies always come in groups of two or more, and since the first-person perspective (which the player doesn’t control) tends to go through some dizzying shifts in perspective there are moments where the player will only have a split-second to react to oncoming attacks. Here’s where the game loses a few points, since the darkness and brown/gray tones of the backgrounds match the color of several monsters. That will lead to some unnecessary damage the first times through the game, and its a change from the usual rainbow of intense colors associated with Sega arcade games. You weren’t expecting “The House of the Dead” to be a cheerful-looking place, did you?

Cinematics at certain points of the game are rare, and they tend to give little clues on how to defeat the bosses, bonus torches (one-ups) from the stranded scientists (another “Resident Evil” handout), or the girlfriend in distress. Of special notes are the “Game Over” and “Chapter X” screens, which feature a creepy and mood-setting line of ink over a white background; it conveys the feeling that somebody was writing something when they were whacked and their hand fell all over the page. The bosses are just like those in “Virtua Cop”: find the pattern, shoot and reload, boss dies (although the last boss, which looks like Black Heart from Capcom’s “Marvel Super Heroes”, is a bitch!).

How many times can a company that creates the best arcade shooters redo that “Reload!” shout and make it interesting? The music is barely audible, barely memorable and fittingly obscure (I assume it has a horror theme to it). You’ll be hard pressed to hear anything other that the constant “Bang!” from the gun you and your partner are packing; I guess we’ll have to wait for the Saturn version of “The House of the Dead” in order to better judge them tunes.

The speech isn’t as vomit-inducing and stomach-turning as that of “Resident Evil”, but it definitely sticks with tried and true mannerisms that are the hallmarks of most horror moviemaking. When you save a scientist and receive a one-up from them, they’ll recite a “Thank You!” so lacking in any emotion whatsoever you’d think they were handing you junk mail. Typical of Sega arcade shooters, you’ll be hard-pressed to understand a word of what the bosses are saying because it comes across muffled and fuzzy. The nice screams, shrieks and murmurs from the ghouls surrounding you put the icing on an otherwise average aural experience.

Repetitive. Very fun, thrilling and an adrenaline rush, but still at its chore is the same game we’ve played for the past four years, “Virtua Cop”. The bloody surroundings and “Resident Evil”/H.P.Lovecraft inspirations are nice window dressing that highlight the great amounts of textures Sega can add up to the Model 2 (something for the new licensees of that technology to look up to). A couple of interesting twists to the genre: your character’s path can take a twist depending on what “hot spots” you hit and/or the way you dispatch the enemies. A good example in Chapter One, Tragedy, is the way you’ll save the second scientist inside the house: you could shoot a door and come to that room from ground level, or kick a door and enter it from the second floor. You’ll have to wait until the end of the game (by losing your lives or finishing the game) to see what path your character took, and make plans if you want to experience a part of the tour you may have missed in the past.

Another slight innovation is the improvement of Sega’s shooting system, which will reflect damage to the enemies depending on what part of their body gets shot (a nice little feature Sega pioneered and Rare conveniently stole and used in their N64 shooter “GoldenEye 007”). Since the zombies in “The House of the Dead” are (you’re not going to believe this!) dead, they could be shot in the arms and legs and, theoretically, don’t feel any pain and still charge towards you. You can take out a zombie by three or four shots to the body or with a clean shot to the head; ditto for the other freaks populating Sega’s new house of horrors. That is easier said than done since the enemies gang up on you unmercifully.

Aside from these two minor tweaks, “The House of the Dead” earns its money with proven, tried, perfected and (sadly) stale gameplay. This has got to be the only game that provides players with the bosses’ weak point before a confrontation (who thought of that one?). Unlike “Resident Evil”, there are very few moments where the gore and horror truly frighten the player; the need to rush and keep the player happily shooting away kill the momentum a suspenseful storyline could have generated. Better than “Duck Hunt” though.

These shooter, inspired by B-caliber horror flicks (is it me or do the characters, Thomas “Eager Eagle” Rougun and “silver Fang” G, look like refugees from a John Woo Hong Kong action movie?) and filled with B-caliber lines and slogans (“It feeds on your fear…don’t go in the house…alone!”) should earn a solid B rating for its stale gameplay. Consider it the last hurrah for Sega’s groundbreaking Model 2 arcade board (“Virtua Fighter 2”, “Daytona USA”, “Fighting Vipers”, “Virtual On”, etc.) before “Jurassic Park” and “Virtua Cop 3” finally push the shooting genre into more well-defined paths.

As boring and tedious as “The House of the Dead” gets sometimes, it is still better than 80% of all other light guns out there. Until Namco develops their “Time Crisis” shooting game into a franchise of some sort (“Point Blank” doesn’t count), the family of arcade shooters from Sega still are the cream of a crop of very acquired gameplay tastes.

The House of the Dead 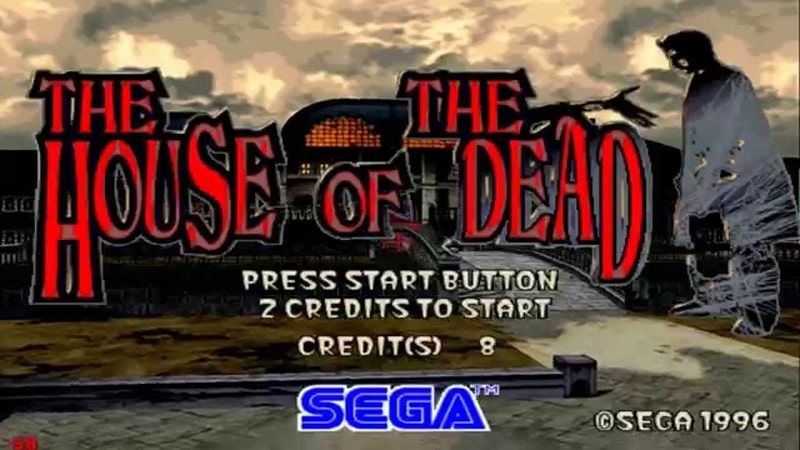